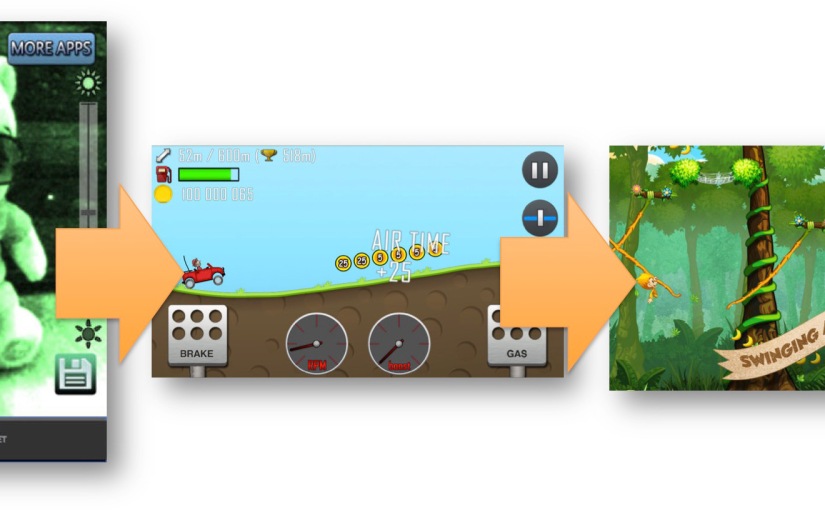 I’ve noticed a pattern when talking to indie game developers who have been successful. A lot of them are not only really good at making games, but also at acquiring users.

This post will be an overview of everything user acquisition (UA) related. Obviously, I cannot cover everything in very great detail, and I encourage you to head over to the real experts for the in-depth stuff. For instance, Eric’s blog at mobiledevmemo.com is a really great resource.

First off, let’s do the rough divide between what you can get for free versus what you have to pay for.

Let’s start with the free stuff and continue with paid UA next week.

If you already have some popular apps, you can cross promote your new game from them. Some 5 years ago, this was mainly what publishers were offering game developers. They wouldn’t say it directly, but their offer was really “we’ll talk to Apple and hope they feature your game, and we’ll cross promote from our other games for a week”.

Cross promotion is, of course, dependent on how large an audience you have to cross promote to. That is, what is the Daily Active Users (DAU) number of your existing apps. You should expect a certain percentage of those people to download your app. As an example, let’s use our Benji Bananas game, and our friends at Fingersoft.

Fingersoft got started by building a few novelty camera apps with funny filters – back in the days when such things as a cartoonish filter on a smartphone camera were considered funny novelties. They then used their camera app users to cross promote the launch of their first game – Hill Climb Racing. The downloads they got that way – only some thousands during the first day – were enough to get the game on Android’s Top New Games list. That got some people to notice, which led to more downloads, which led to a higher chart position and more downloads in a self reinforcing cycle.

Cross promotion (and other tools that can get you a short burst of installs) is really a way to prime the pump. A good game, with some virality, can start to spread if it’s given a chance. You just need to get over the critical mass first. What the critical mass is will depend on the game. Some thousands was enough for Hill Climb Racing, 75 000 was clearly enough for our Benji Bananas game, and 40 000 was enough for Draw Something.

When we partnered with Fingersoft they used Hill Climb Racing to cross promote our Benji Bananas game. The first day we got some 75 000 downloads, which put us pretty high on the charts already. From then on, the game started growing more based on chart positions than on cross promotions. You see, a good game will have a lot of players coming back to it every day. The first day you cross promote, everyone of the Daily Active Users will see the ad for the new game for the first time. The next day, most of them have already seen it, effectively likely to halve your cross promotion power. In our experience, you can get up to 5% of your DAU to install the new app.

A good publisher really will have a better chance of getting Apple and Google to feature you than most new indie developers have on their own. It’s a sort of pre-filtering. As the vast majority of all games that are launched are just not interesting, merely getting picked by a publisher sends the signal that some external party is interested enough to at least commit some resources (even if it might only be their working time, in some cases) to your game. That means that the game is at least worth taking a look at for the featuring teams and possibly for some news sites.

Otherwise, the way to get featuring is to build something different, something with really high production values and generally something that will make Apple’s or Google’s products to look great.

The next thing to look at is optimising your App Store or Google Play page. Getting the right text and keywords there is a form of Search Engine Optimization. The key is to get high rankings on a few keywords that are often used. You probably should not go for the very top keywords, as the competition there is so tough that you will never get high up when people search for things like “free game”. Try to own a word that’s trending, but that others have missed. You should be able to drive some thousands of downloads per day using this strategy.

Here are some further hints and tips from Chartboost on how to optimise your keywords. Optimising the screenshots is another part of the search engine optimisation.

Last, you can try to earn publicity by speaking to various media and trying some “stunts” to get free publicity. Unfortunately, this is very hard to do for mobile games. Jake Sones wrote openly about his marketing efforts that did not lead to much.

Traditional media often do not really take mobile games seriously as content. Stories about mobile games are often more about the business aspects than about what the games are about, as Thomas Bidaux points out on Chartboost’s blog.

It’s pretty much the same thing with YouTubers. There are quite a lot of creators who are primarily making videos about games. The biggest YouTube star of them all, PewDiePie, started out by mostly making videos of himself playing games. Of course, these guys will make a video about your game out of pure interest in case they find your game interesting. However, mostly they find PC games interesting, and a mobile title will have to be something special in order to attract their attention.

What I completely left out of this now, is designing the game for virality. That will have to be its own article. Next week will be the overview on how to acquire users with money.