In an earlier post about SDKs, I wrote about ad networks. This post will expand upon that ecosystem.

It was likely simple once. You had a game or website with a lot of traffic, and someone wanted to show ads to all those eyeballs. So you did a deal. Like this:

Now there are three layers in between. At least.

The problem with direct sales are the communication channels. There’s more than one game with a lot of players, and there’s more than one company that wants to advertise. If everyone is talking to everyone then they all waste huge amounts of time just discussing and cutting deals. If a thousand advertisers talk to a thousand game developers, then there are a million deals to be made. Enter the ad networks.

Now, with a thousand advertisers and a thousand game developers, there are just two thousand discussions taking place, and they are mostly automated by the ad networks systems. Clearly this is useful and saves a lot of wasted effort. It’s so useful that more than one company got this idea! Now there are a few hundred ad networks around. 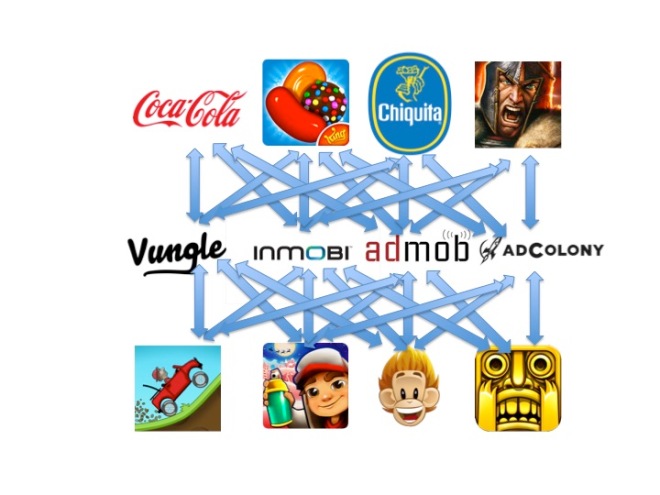 The solution is to integrate more than one ad network into your game. Your game will then say to the ad network that “here’s a spot where you are allowed to show an ad”. If the network has a suitable ad to show, it is sent over, and they log what the user did (watched the video, clicked the link, or ignored it completely). Your game can basically ask the highest bidding ad network to show an ad first. If they have one to show, that’s great. If not, you go on to ask the second highest bidder if they have one, then the third and so forth down the line. This is called the “waterfall”.

Unfortunately, it’s a lot of work involved in optimising your ad revenue. Who has the best paying ads is always changing, and is different depending on what country your player is in. Which means that you have to have several waterfalls and constantly monitor and update them. Fortunately, there are now companies that offer this service. A mediation platform basically does this for you. There are several around, some run by ad networks (they swear on their grandmother’s grave that they do not favour their own ad network), and others from independent companies.

At the advertisers end, there is a similar problem. There are lots of ways to advertise your service or app, how do you know what’s the best one? You could be running small campaigns on each possible channel, measure how they did and then decide where to spend the big bucks based on that. This requires quite a lot of skill, math and time to do. Fortunately, there are companies who can do this advertising for you. Companies such as Fiksu and Twigeo are there for you when you want to outsource this job to professionals. To keep track of where you’re getting your installs, you need an Attribution partner, such as Adjust, Tune or AppsFlyer.

Now we are left with this picture of the market:

Currently, I’m mostly thinking about which network mediator to choose when we’re trying to make money from ads. You know, there are several, and we want to optimise between them…

And I have the same problem when wanting to buy ads. Someone really should offer me a service to choose between the service providers here…

One thought on “Making Sense of Ad Networks”